What is androgenetic alopecia?

Androgenetic alopecia, commonly referred to as male-pattern baldness, is the most common type of progressive hair loss and affects over 50 million men in the United States. The area of the scalp that is affected, age when hair loss first starts, and severity of the hair loss all vary based on the individual. The cause of the condition also varies and is often a combination of environmental, genetic, and hormonal factors. Although many of these factors remain unknown, sufficient evidence shows the association between specific genes and hormones to this condition. 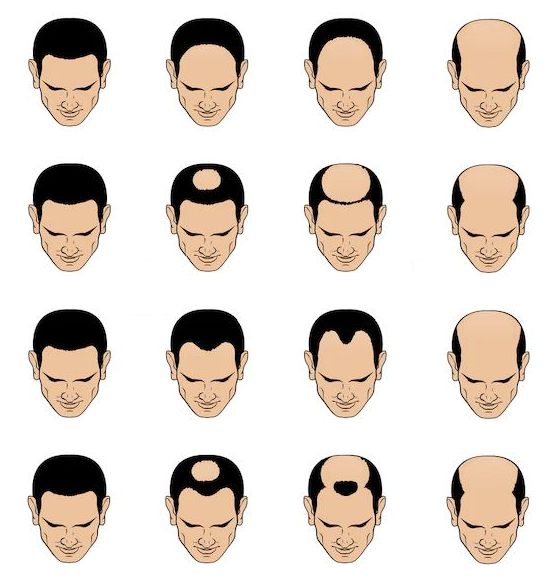 What can my genetic results show?

Genes are segments of DNA that code for proteins that make up our unique characteristics. Nucleotides, the basic building blocks of DNA, make up these genes and are commonly represented by a sequence of the letters A, T, C, and G. Mutations or differences in the sequence of nucleotides have the potential to cause certain conditions or abnormalities. The most common genetic mutations are what we call single nucleotide polymorphisms (SNPs). These occur when a single nucleotide (letter in the sequence) is changed and can cause multiple variations of that particular gene. In short, even one letter switch has the potential to alter your appearance.

Since androgenetic alopecia has been linked to several genetic variations; studying the specific genes can reveal more suitable treatments for an individual’s unique needs. The SR5DA gene, for example, codes for the enzyme 5-α reductase (5αR). 5αR is responsible for converting testosterone into the more potent form, dihydrotestosterone (DHT). Both testosterone and DHT belong to the androgen family and are required for male sexual development, maturation, puberty, sex drive, and hair growth. However, increased DHT levels are known to cause negative effects in men such as hair loss and prostate enlargement. There are two types of 5αR, type I and type II, coded by genes SR5DA1 and SR5DA2, respectively. Both forms of the enzyme are found in multiple regions of the body and contribute to the various roles of these hormones.

Mutations in the SR5DA gene have been linked to conditions in both males and females including hair loss, prostate enlargement, and polycystic ovarian syndrome. There are currently two main SNPs of the SR5DA gene concerning androgenetic alopecia. Remember, a SNP is a single letter (DNA building block) change in the sequence of our genes. The first is where a C is replaced by a G. This mutation produces a more active form of type I 5αR. The second is where a G is replaced by any of the other bases (A, T, or C). This mutation produces the most active form of type II 5αR. In both mutations, the increased activity of the enzyme 5αR will make more DHT and lead to a higher likelihood of hair loss.


What can my genetic results show?

Many current hair loss treatment regimens call for the same medications. Although most are beneficial to stimulate hair growth, they may not be necessary depending on your individual genes. A common component in most treatment regimens is a 5αR inhibitor, a drug that stops the conversion of testosterone to DHT. The two most commonly prescribed 5αR inhibitors are finasteride and dutasteride. Finasteride works primarily on type II 5αR whereas dutasteride works on both type I and II 5αR.

Both finasteride and dutasteride have demonstrated success in preventing hair loss and stimulating new growth. Finasteride, marketed as Propecia®, was the first (and only) FDA-approved 5αR inhibitor for hair loss. The use of finasteride can increase hair count, overall hair appearance, and decrease further hair loss.1 Though dutasteride is not FDA approved for the use of hair loss, it can be prescribed off-label. Off-label prescriptions are medications used for any condition not currently listed as an FDA-approved use of that drug. Recent studies have shown that dutasteride is more effective in stimulating hair growth in dose strengths half that of finasteride.2 However, since dutasteride works on both type I and II 5αR, it may not be the best choice for an individual that has a normal functioning type I 5αR. Finasteride in this case may be more beneficial and avoid conditions like hypertrichosis (excessive hair growth) in areas that are not intended for treatment such as body hair. This is what makes genetic testing unique; it uses your own genetic code to fix the specific issue and avoids adding any unnecessary medicine into your system. Think of it as a the old saying “don’t fix what isn’t broken.” Both medications have similar side effects including decreased sex drive, inability to maintain an erection, and ejaculation issues. However, the respective 12-month clinical trials showed these side effects occurred in less than 2% of the 945 men using finasteride (1 mg) and less than 5% of the 2,167 men using dutasteride (0.5 mg).

Currently, most finasteride and dutasteride prescriptions come in tablets or capsules and are taken by mouth. Topical formulations of 5αR inhibitors have been studied and displayed further decreases in side effects and similar hair loss prevention results.3 These formulations can include creams, lotions, ointments, oils, and even shampoos that could be applied to your scalp. Oral and topical forms both have their pros and cons depending on the individual. For example, a capsule may be easier for a person to remember and fit into their daily routine but a cream may be better for an individual who is more susceptible to the potential side effects. Just like the type of medication in your unique treatment plan, the way you take it can be optimized for your needs as well. With your results, both oral and topical formulations can be made depending on your preference and individual requirements.

Nimbus in the news